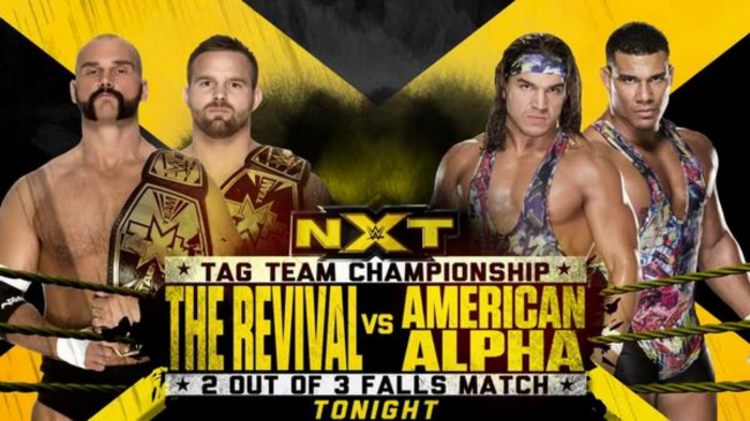 In April 2016, American Alpha won the titles from the Revival but the Revival won them back two months later. This was the rubber match. The two out of three falls stipulation takes us back to good old school tag matches from the late ’80s, which is right up the Revival’s alley. The teams played off their previous two encounters while throwing twists into the action. They did a great job in showcasing how evenly matched they were and neither team could even gain a fall after fifteen minutes. Alpha had great babyface fire and the Revival, as always, nailed every single heel tactic they could. Both teams shined before stereo ankle locks led to Dawson tapping at 17:13, giving AA a 1-0 lead. The Revival were quick to tie it with an inverted figure four at 18:33. Tied at one in their match and the series, the stakes were never higher. They both teased successful submissions and had counters ready for everything. Gable tried a German suplex off the apron but it was blocked and he took a Shatter Machine on the apron to end things at 22:08. The Revival retained and moved into an even better rivalry but people shouldn’t forget how great their trilogy with American Alpha was. 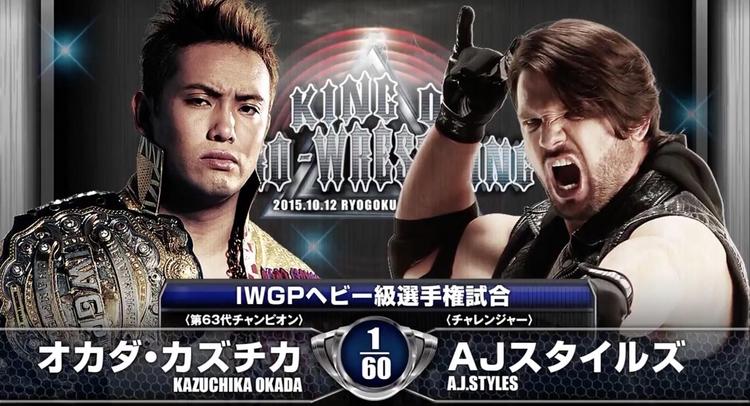 Look at the two men involved in this match. It’s almost a guarantee that you are going to get a great contest. Most of the time they meet it is indeed great, which is what I would consider this encounter, though it wasn’t their best. Earlier in the year, Kazuchika Okada ended the IWGP Heavyweight Title run of AJ Styles. Styles pinned Okada in a six man tag in August, setting up this rematch. They were given a lot of time, 30:15 to be exact, and it was similar to a lot of Okada matches. They tend to start a bit slow before building to the second half, where things just get nuts. The Bullet Club got involved, and I get that they’re heels, but it was a bit much here. That’s part of why I love the match at Dominion so much more. There, the Bullet Club interference was cut down. Of course, the finishing sequence was a thing of beauty here, with Okada reeling off three Rainmakers to retain the gold. 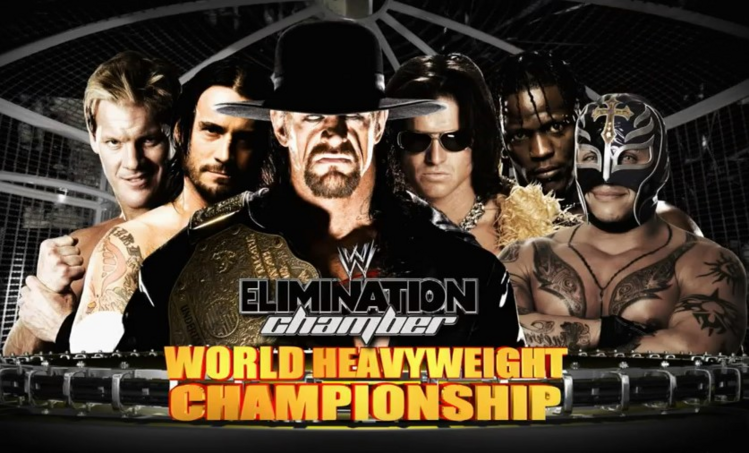 One of the earliest matches to appear on this list. This was one of the most unique Elimination Chamber matches in history. For starters, you had CM Punk eliminate R-Truth in the first few minutes. That allowed him to then go on a sermon that was part of his Straight Edge Savior gimmick. Then, Rey Mysterio entered and they had a really good one on one battle that was won by Mysterio. Jericho was in next and they reignited their classic rivalry from a year prior. Morrison got a hot run once he entered. This was around the time he started showcasing that he could be an upper mid-card guy flirting with the main event scene. He even got to go head to head with The Undertaker here. The treat was watching Jericho and Undertaker go at it. It’s amazing that they never had a legitimate rivalry. Of course, it came down to them. Shawn Michaels interfered by popping up through a grate in the Chamber floor. He delivered Sweet Chin Music and Jericho covered to win the title in 35:36. It was a great ending, put the title on someone good, and built wonderfully towards HBK/Taker II at Mania. 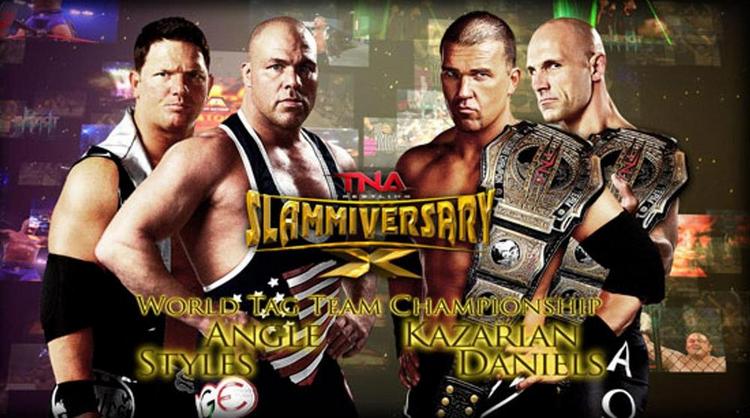 Sometimes, even the goofiest of storylines can be saved by good wrestling. The AJ Styles/Dixie Carter angle was pretty rough. The one good thing to come from it was this match. It allowed four damn good wrestlers to just do what they do best. Wrestle. Styles came in aggressive due to the storyline. It worked in his favor early but the veteran champions turned it on him. Christopher Daniels and Kazarian isolated him with great work. The tag eventually came to Kurt Angle who was on fire and showing why he was one of the best ever. The second hot tag back to Styles was great and the pace never slowed after that. There was tons of action and some great late drama before the titles changed hands in shocking fashion after a fantastic 14:27. Like I said, just let great wrestlers go out there and wrestle.

When you consider the history between these two, there was a lot to unpack here. Both men were part of the New Three Musketeers of NJPW, along with Shinsuke Nakamura. However, instead of focusing on wrestling, Shibata opted to try his hand at MMA. Tanahashi wasn’t happy that he left the company during their struggles. Add in the kayfabe excitement here, as the winner would earn a spot in the finals against Tetsuya Naito, and you had high stakes. This was a case where Shibata was the hard-hitting guy we all knew and loved. Tanahashi tried to hang tough with but he ultimately had no chance. That led to him looking kind of desperate. That desperation is what made the finish work so well. Tanahashi only won because of a well-timed small package counter, taking the victory in 10:56. 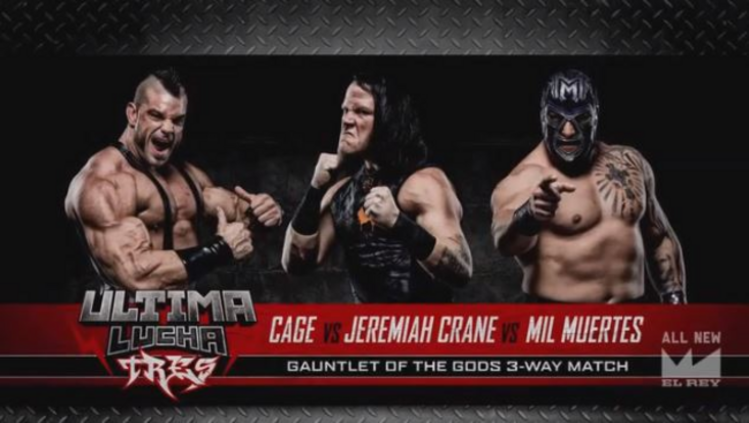 II’ll be the first to admit I don’t care for Sami Callihan. But, Jeremiah Crane is better. He’s the definition of a guy who works better in the Temple setting. This match stemmed from Cage winning the Gauntlet of the Gods. With a weapon that wields such power, Catrina wanted it, which got Mil Muertes involved. Crane got involved because he’s been in love with Catrina since they were kids. There’s more to it than that, but I’m not gonna spend a ton of time on the angle. The match itself was the wild one I hoped for. Crane was overmatched and got busted open within minutes, so he brought weapons into play. He still took the first big bump, getting chokeslammed through a table. Mil and Cage hossed it out. The best part was Cage superplexing Crane to the outside through two tables that Mil was laid out on. Pure insanity. Cage eliminated Crane with Weapon X shortly after, leaving the hosses to do battle. Unfortunately, their exchange lacked and didn’t last long, with Mil hitting a Flatliner on a chair to win in 14:04. Despite the finish not being great, this was a rad, violent brawl. 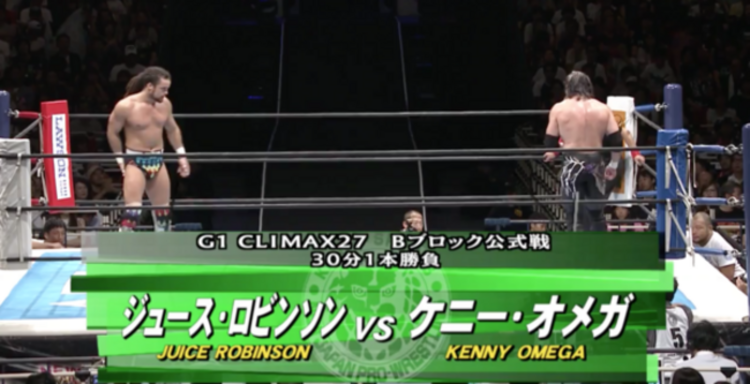 In his G1 Climax debut, Juice Robinson beat the legendary Satoshi Kojima. Unfortunately for him, five straight losses followed. That left the 1-5 Juice to take on the 5-1 Kenny Omega, fresh off becoming the first ever IWGP United States Heavyweight Champion. Juice fought hard in all his losses, but they took their toll and he entered most matches, including this one, limping. In the early stages, they took this outside and Kenny busted out the ring post figure four, which will always pop me. The leg work continued and Juice sold like a champ. Juice’s comeback had a lot of fire. He excels at that. They both had counters ready, with Kenny blocking Pulp Friction and Juice blocking the V-Trigger. They also countered each other’s finishers, before Omega connected on a reverse rana and V-Trigger. However, Juice turned the One Winged Angel into a cradle to score the upset and biggest win of his career at 15:36. An awesome moment to cap a great match. I love that it didn’t follow the typical Omega big match formula. The post-match reactions added a lot, with Juice shocked and amazed, while Omega was frustrated at possibly blowing the tournament. 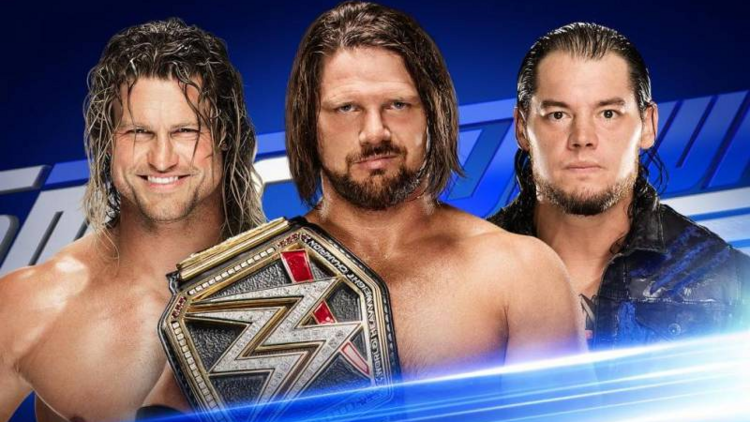 Kurt Angle had a great first year with WWE and it was all the more impressive because it was his rookie year in the business. But for my money, nobody had a better first year with WWE than AJ Styles. He wrapped up that 2016 with this outstanding WWE Title defense. In his way were Dolph Ziggler, who is bland but can have some good matches, and Baron Corbin, who was gaining momentum as a heel on Smackdown. Singles match with each guy doesn’t sound interesting but they really made this Triple Threat bout work. I really enjoyed how Corbin was booked like a monster and the other guys had to team up to take him out. Then Dolph and AJ went at it with a great exchange. Corbin eventually came back in and hit End of Days, only for AJ to nail him with the Phenomenal Forearm. He then covered Ziggler to retain after 21:15. One of the most underrated matches in recent memory. More people should talk about how great this was. Also, the End of Days/Zig Zag spot was one of my favorites ever. 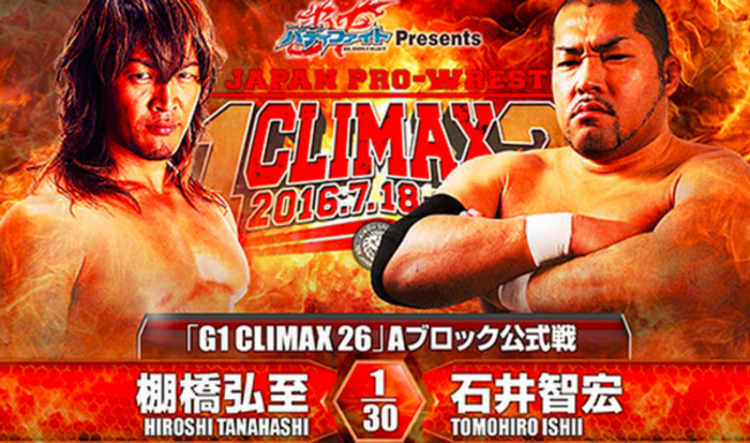 Two of the most consistently great G1 performers have been Hiroshi Tanahashi and Tomohiro Ishii. Tanahashi began this G1 Climax 0-3 before reeling off two straight to turn things around. Though he was on a streak, Ishii just kicked his ass from the opening bell. Tanahashi tried to battle headbutts with Ishii which was a clear mistake. Ishii pulled a page from Tanahashi’s book with dragon screws and leg work, so Tanahashi did it back. They traded blows for most of this 16:15 battle. Tanahashi was at a disadvantage there but found ways to counter the brainbuster and survive Ishii’s other big offensive attacks. Ishii came close several times until Tanahashi nailed two High Fly Flows to even his record at 3-3. This was one of the best matches of the entire G1 26. Tanahashi played the babyface fighting from behind and sometimes that might be the same old, same old, but here it felt top notch. When Tanahashi is on his game, there are very few better. 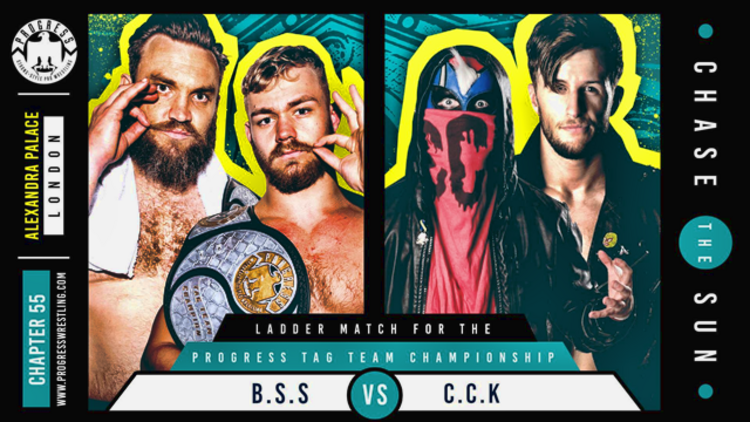 To start PROGRESS’ biggest show ever, they went with a huge Ladder Match for the Tag Team Titles. Trent Seven and Tyler Bate reigned as champions for most of 2017, with #CCK dethroning them at Chapter 50. British Strong Style regained the titles at the next chapter, setting up this encounter. The crowd was molten hot for this, desperately wanting to see Bate and Seven get their comeuppance. The teams brawled early, with #CCK using their aerial skills to take control. Once the ladder came into play, Kid Lykos took a sick dragon suplex onto the side of the ladder that legitimately made my jaw drop. Bate busted out an Undertaker like dive, as well as an incredible feat of strength when he used a big swing and airplane spin on his opponents simultaneously. He continued to star, even paying tribute to Terry Funk by using his infamous ladder airplane spin. There were too many spots to name, before a Tyler Driver ’97 was countered with a backdrop onto a ladder, and Brookes pulled down the titles to win in 17:27. It had wild spots, while including the sense of disdain the teams had for one another. A few spots felt contrived, but they did well to incorporate their signature stuff in a way that made sense.