Patapon 2 is a rhythm-action RPG developed by Pyramid and published by Sony for the PSP in 2008-2009. It later received a PS4 port in 2020. Following the defeat of the Zigotons in the first game, the Patapons built a great ship to traverse the ocean with. But their journey is cut short by a kraken and the few survivors of the attack wash up on an unknown shore. Guided by Almighty once again, they find themselves in the ancient Patapon homeland, which has now been been taken over by the masked Karmen tribe. Joined by a masked warrior of their own, the Patapon campaign through the land to reclaim their homeland and find Earthend. 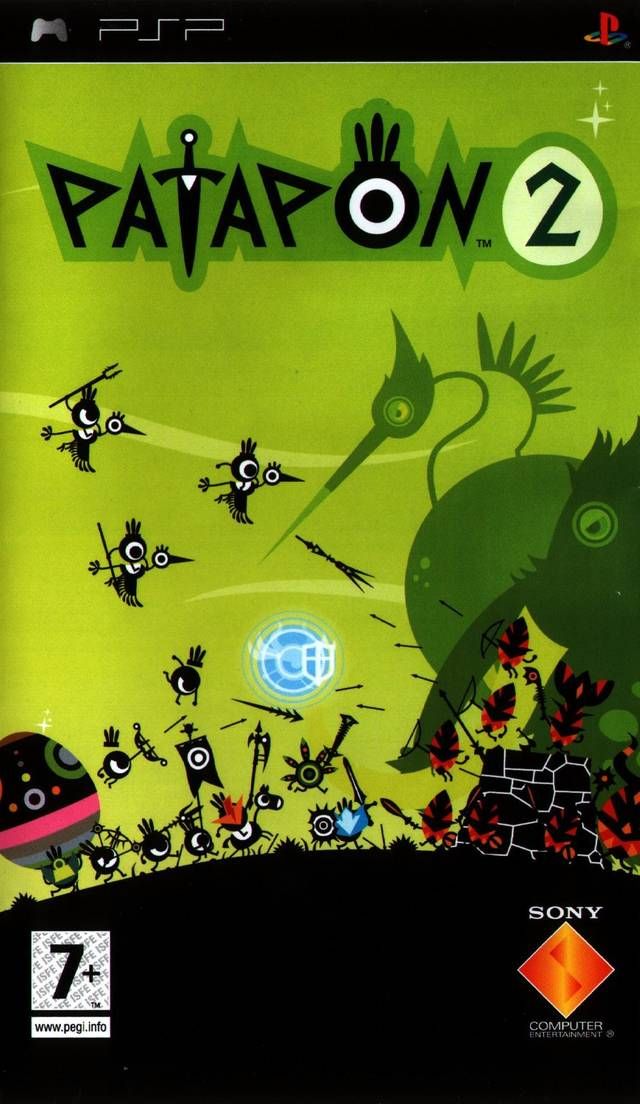 Patapon 2 feels less like a proper sequel and more like a combined sequel, director’s cut and expansion pack. Having only around a year of dev-time, I’m not surprised this is the case. The story is technically new and builds on the first game properly (bringing back key elements of that story), but one cannot ignore the fact that a lot of story beats are repeats of previous ones. This extends to gameplay too, as every major boss, song and stage theme has been recycled (including the final boss of Patapon 1!). There is of course new content present, but the majority of it is recycled. Being generous, I’d say that Patapon 2 has 130-140% the content of the original game.

While it is a shame that so much has been reused, it also sort of invalidates the first game thanks to the improvements to gameplay across the board. Barring some key scenes of the first game, you could get by only playing Patapon 2 and then go into 3. The story is simple like before and stands on its own. The theming of gray-morality tribal warfare remains, but with he Karmen tribe being more outright villainous than the Zigotons, the Patapons you command are painted in a more heroic light.

On the whole, I’d say the story is as good as in the first game, but since the story exists mostly to justify the very unique gameplay, I’m more fond of the story in this game, since the gameplay is so much better. Let’s get into that now.

The core of the first game’s gameplay was really good, but it was marred by execution. So I’m happy to say that for 2, things have been changed for the better. The first big change is the introduction of three difficulty levels that dictate how strict the beat timings are and how well you need to perform to hit Fever Mode and activate the new Hero Mode.

Being rhythmically challenged according to the standards of the first game, I am happy to play the whole thing on easy mode. It’s still engaging, as you can still mess up your combo if you’re not paying attention. But it is such a relief to be able to maintain Fever without having to worry about it breaking at the worst possible moment as much.

But beyond the inputs being easier should you want them to be, there are also some other vital changes. There are two more songs available, the first giving you the ability to jump to evade certain attacks faster than with the retreat song and the second letting you nullify status ailments. These two songs really round out your power set, making a few previously troublesome bosses much more resonable to deal with.

Then there’s the masked Heropon, who quickly becomes the center of your army. Not only can he revive mid-mission and transform into any of your unlocked classes and Rarepons, he also has two very important extra boons. The first being his mask, which grants a buff to or more defence against one specific thing, be it a stat, element or status effect. As such, he is very adaptable and there are some really fun combinations to be made between the various classes, Rarepons and masks. You can make a Kibapon that’s great at knocking back enemy forces, a Yumipon great at setting things on fire with arrows or just a beefy Dekapon with even more health.

But what really makes him so useful is the aforementioned Hero Mode. By striking a perfect measure (3 in hard mode), the Heropon stops what he’s doing for another measure before a class-specific ability manifests (explosive spears, an unbreakable shield, a continuous rain of arrows) that you can maintain for as long as you keep up perfect beats (with allowance for one measure of less than perfect beats).

These Hero Mode abilities are ridiculously powerful when compared to anything else you can do, so much so that the game feels balanced around your ability to spend as much time as possible in Hero Mode at times. This is another reason why I prefer playing in easy mode, as you can depend on both maintaining Fever and triggering Hero Mode, while still needing to read the battle and potentially having to break your combo to evade attacks.

Still, him being so malleable and powerful really helps offset how much effort it takes to build an army, nevermind how much work it takes to make one that’s good at more than one thing.

While the changes to combat are very welcome, what really saves the game are the changes to the loot and army creation systems. Permadeath is no longer a possibility (nor a requirement for making new Patapons) and it is so much easier to get common material and weapons.

Siege missions are now replayable, making it a cinch to outfit your army with at least decent equipment. Rare equipment remains rare of course, but just being able to give everyone something beyond their starting equipment is such a relief. Same goes for the changes to material aquisition. Rocks are now actually common, since they commonly drop from destroyed Karmen structures during the siege missions. And bosses now drop only a specific type of material instead of multiple ones, making it clear what boss you should refight in order to get the material you want. As such, any material beyond the rarest of the rare is like an order of magnitude easier to get when compared to the first game. The minigames are now more numerous and focused as well, providing a decent way to get certain materials outside of missions. There’s even one that essentially allows you to exchange excess material for Ka-ching, making that resource much less difficult to aquire.

Instead of mixing Ka-ching and two classes of material at different levels to get different Rarepons, you now simply advance through a Rarepon tree by paying the displayed amount of Ka-ching and material. If a Rarepon strikes your fancy, you can pump more resources into it in order to level it up further instead of continuing on along the tree. Each individual Patapon can swap between forms before missions and your Heropon inherits the most upgraded forms you have. And once you reach certain Rarepons within the main three classes, you can unlock 2 derivative classes per main class, a few of which are new to Patapon 2, allowing for more varied armies.

As far as just getting to the end of the game is concerned, this system is wonderful. But there are aspects of it that makes it pointlessly grindy and kind of frustrating to someone like me who loves properly balanced progression systems. As I said earlier, making a fully leveled army that is good at a single thing (nevermind 2 or more) takes forever. Even just focusing on a few Rarepons on a single Patapon in order to give the Heropon more abilities is a terrible grind that’s really not necessary to beat the game. It’s like the army creation is balanced against a game that progresses from a difficulty of 1 to 10, but the actual game only goes up to a difficulty of about 3 or 4.

The only thing that I’d count as a “post-game adjacent” are all the normal bosses that scale in difficulty, a few optional hard forms of said regular bosses (that also scale up) and the Patagate (which are just the previous two categories of bosses fought in a different context that also scale up a pointless amount), none of which feel very noteworthy unless you’re trying to create a stupidly over-powered army.

The Patagate is the game’s Ad-Hoc multiplayer mode that can also be played alone with NPCs. Here, 4 Heropons team up to beat a boss within a time limit. Managing to do so starts up a rhythm minigame. Performing well at that minigame unlocks new helper NPC Heropons and new masks beyond the starting one. Playing alone presents different challenges compared to the main game, as it is locked in normal difficulty and beating a boss without an army to back you up can be quite challenging. But I can’t help but think that it was balanced for 4 player-controlled Heropons, which are a lot more powerful than the NPC ones. Anyways, back on track.

Compounding the issue of army-creation is the optimal way of both gaining material and fighting bosses. A few confusing aspects of the original’s stat system has been straightened out here and now bosses operate on consistent rules. Should a boss be struck with the stagger status effect, they’ll be stunned for a few seconds and drop a random reward from their loot table, which is either some Ka-ching, their type of material or a rare item.

As such, the stagger stat and its associated Rarepon are so much more useful than anything else in the game. To a fault really. The fact that setting up your army to stunlock bosses also showers you in upgrade material is ridiculous. Now, to have a better chance of getting rare material, you need to inflict the boss with the status effect that they’re weak to before you stagger them. But as I’ve said, getting an army that can do more than one thing well takes forever and the game isn’t hard enough to justify aquiring high-tier material.

What they’ve done here feels like a cheap way of filling the game with content when they should have instead made it easier to change up your army in order to make room for more diverse challenges in the missions. So instead of the cure-all solution of stunlocking bosses, you should need to balance your army setup to consider the strengths and weaknesses of different classes, Rarepons and equipment. As-is, stunlocking and dealing high damage is all you need to concern yourself with to beat the game.

Still, for what it’s worth, it’s still a really good time. Just don’t get tricked into grinding for nothing just because you can. It’ll only drain the game of all the goofy fun it has to offer.

- Welcome to my world, Enjoy your stay, But always remember,

There is no return.

Login to vote this up!